All you need to know about Etherpad

Someone posted to a list I follow something to the effect that she had seen on a list that Etherpad.net was shutting down today, the date of this blog post, Dec 31, 2019. That seemed odd to me. Ethernet is open source software.

I duly visited https://etherpad.net/ and found this notice:

good bye! After 1896 days or roughly 62 months, the Etherpad (Lite) service Etherpad.net has shut down for good. 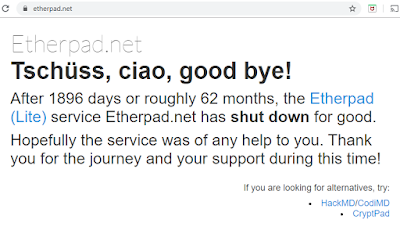 62 months is is also roughly a little over 5 years, but there is no date mentioned at https://etherpad.net/ as to when this notice was posted.

Etherpad Lite is described here
https://www.mediawiki.org/wiki/Etherpad_Lite
It is basically a recoding of Etherpads in Javascript to replace the previous, presumably more bloated, and likely becoming out-dated, coding scheme.

This page, https://meta.wikimedia.org/wiki/Etherpad, explains that, according to this deprecation notice, https://lists.wikimedia.org/pipermail/wikitech-l/2013-November/073249.html
the old Etherpad was replaced by a new installation of etherpad-lite in 2013. Old pads were archived to etherpad-old.wikimedia.org, which was removed on Monday, 30 December 2013. 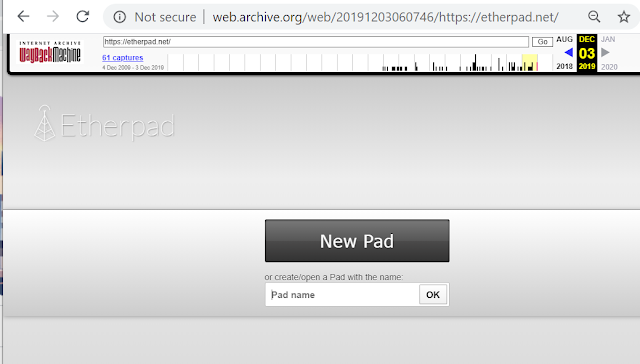 So the notice would have been posted some time after that, meaning the Etherpad Lite version had been up at that URL since some time in 2014, to be replaced by the new notice at some time in the next few weeks.

A link on the page with the notice at https://etherpad.net/ also points to https://etherpad.org/, which identifies itself as being the home portal of the Ethernet Foundation. This site allows anyone to download the open source Etherpad software so they can mount it on their own server if they wish. 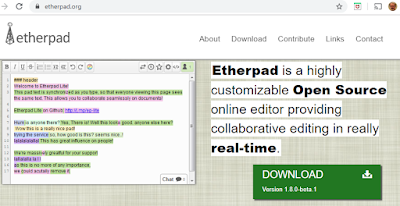 Wikipedia, https://en.wikipedia.org/wiki/Etherpad, has a nice basic explanation of what Etherpad is and how it came about that starts off with this paragraph:

Etherpad (previously known as EtherPad) is an open-source, web-based collaborative real-time editor, allowing authors to simultaneously edit a text document, and see all of the participants' edits in real-time, with the ability to display each author's text in their own color. There is also a chat box in the sidebar to allow meta communication.

First launched in November 2008, the software was acquired by Google in December 2009 and released as open source later that month. Further development is coordinated by the Etherpad Foundation.

Wikipedia goes on to explain

After the release of the software as open source, a number of people have set up Etherpad servers, as clones of the original website. Soon after, users and programmers of Etherpad, after an initial meeting in the #etherpad channel on freenode, created the Etherpad Foundation to coordinate further development. Their website maintains a list of a growing number of sites that run the Etherpad software.

Here are the lists of all sites running Etherpad. They can be linked to from https://etherpad.org/ (so they appear to be the official lists of sites running Etherpad according to the Etherpad Foundation). They are categorized into sites running original Etherpad code and those running the re-coded Etherpad-lite (Javascript version). The two sites are further subcategorized into sites that are SSL-enabled and non-SSL enabled (and also sites that are inactive, those reporting errors, and one or two that are not free).


SSL is the secure socket layer that distinguishes whether a site runs under http:// or https://. This page provides a decent explanation,
https://yourbusiness.azcentral.com/ssl-enabled-20386.html.
It also explains that the term SSL is essentially no longer meaningful, and refers now to TLS.

SSL/TLS is a security system that combines authentication and encryption. In regular communication over a network, a client contacts a server with a request. The server replies with a response. Under SSL, only the client needed to present authentication. With TLS, both the client and server must prove their identity. The identification procedure includes an encryption key, which is used to protect all transmissions once the connection has been established. 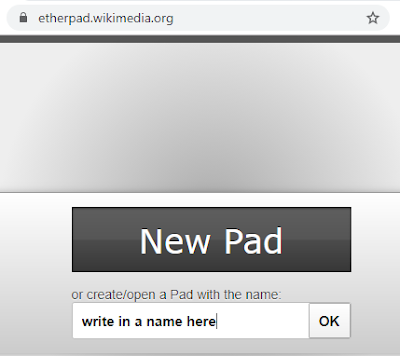 This page describes this etherpad:
https://meta.wikimedia.org/wiki/Etherpad

I just created a new wikipad at that space. I just checked; it's still there in 2020.
https://etherpad.wikimedia.org/p/Vance's_Wikimedia.org_Pad

The composite listing sites do not mention the site that I am using for my Etherpad
https://etherpad.mit.edu/ 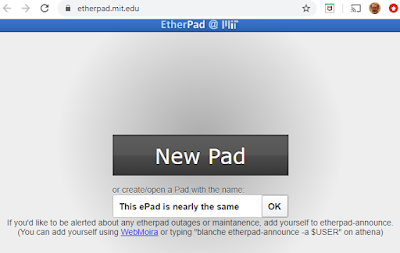 That particular chat space has been up for years. According to its "time slider" it was started on May 5, 2013 and had recorded 15,309 distinct edits by the day this post was made, and 34 edits since then, each of which can be played back and revisited one by one in the time slider (or you can click on the slider to see clusters of edits at their approximate location on your time line but you can't just change the edit number in the URL, doesn't work for me at any rate). 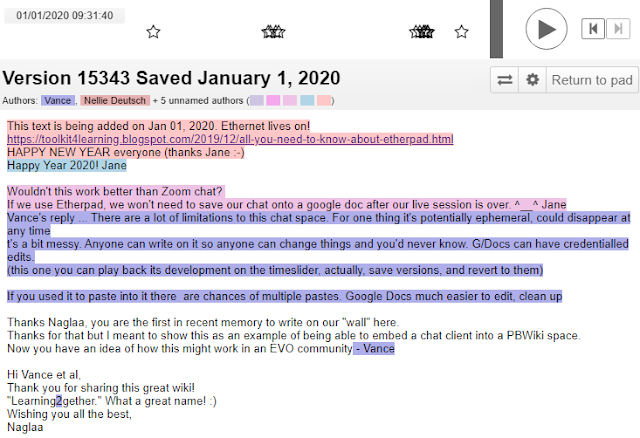 This is impressive software and is a testament to open source communities in the way it is implemented, regulated, and maintained. However, if you use this software, heed the warning coded into each new page you create at https://etherpad.wikimedia.org/ ...

Welcome to the WMF etherpad installation. Please keep in mind all current as well as past content in any pad is public. Removing content from a pad does not mean it is deleted. Keep in mind as well that there is no guarantee that a pad's contents will always be available. A pad may be corrupted, deleted or similar. Please keep a copy of important data somewhere else as well.

The thing to keep in mind with Etherpad is that is it nicely working open source code that has been mounted on hundreds of servers all over the world. The health of your Etherpad depends on the server it is working on, not on the existence of Etherpad itself, whose code is being maintained and made available for download by the Etherpad Foundation at https://etherpad.org. So despite Etherpad sites coming and going with the usual fluctuation we have come to expect from anything you can get for free on the Internet, with Etherpad, the code has gone viral, so like the common cold, if you lose one you can surely find another.

And on that topic, here is an Easter egg for you, something unexpected as a reward for reading all the way to the bottom (or scrolling here, whatever). I've been drafting an article for the February, 2020 issue of TESL-EJ on the most significant losses of Web 2.0 software to have disappeared from the palettes of educators over the past ten years.

If you want to read it, welcome, and feedback and comments are always appreciated.
https://docs.google.com/document/d/1M4CY8MK5-IsZr5mdHclNYF6ft1LZEDmq_c88pG_zAVA/edit?usp=sharing

Posted by Vance Stevens at 12:37 AM No comments: Links to this post